Anthropology > Syllabus > JPN 362A: The Culture of Food and Health in Japan The University of Arizona, Fall 2019 (All)

JPN 362A: The Culture of Food and Health in Japan The University of Arizona, Fall 2019

Course Description​: How do we know what is good for us, who gets to decide, and how does "healthy" change over time? This seminar explores these basic questions through the lens of Japanese food c... ulture: the dietary trends, choices, and ideas of proper consumption that help shape the relationship between people's bodies and the world around them. We will discuss how and why “eating right” became such an important issue in Japan from the seventeenth century to the present and ask what the everyday experience of eating can tell us about the core themes, concepts, and events in Japanese and East Asian history. By putting Japanese foodways in conversation with global gastronomy, we will investigate what makes food “cultural” and what makes it historical. This course welcomes undergraduates of all interests and majors, and no prior knowledge of Japanese language or history is required. Additional materials in East Asian languages will be made available upon request. Course Objectives: ​During this class, you will: ● Deepen your understanding of the culinary history of Japan and how it connects to foodways today, including deploying theoretical frameworks to situate Japanese cuisine in global context. ● Critically evaluate sources of dietary knowledge and trace the historical roots of various notions of healthy eating. Learning Outcomes:​ After taking this course, you will be able to: ● Identify the major periods, trends, and themes in the history of Japan, with special attention to the relationship between daily life, bodily practice, and social change. ● Approach Japanese and other East Asian societies with greater sensitivity and respect for cultural diversity. ● Conduct basic historical research and mobilize documentary evidence to shape your own informed arguments about the past and present. Week 1: ​What Can Food Culture Tell Us About the Past? What is “Japanese Food”? Tues. (Aug. 27th) ​Course Introduction—What Can Food Culture Tell Us About the Past? Readings: None Thurs. (Aug. 29th) ​Food Cultures of Japan, Then and Now Readings: 1. Rath, Eric. ​Japan’s Cuisines: Food, Place, and Identity (Chapter 1: What is Traditional Japanese Food?) 2. Stalker, Nancy. “Introduction: Japanese Culinary Capital.” In ​Devouring Japan: Global Perspectives on Japanese Culinary Identity Week 2: ​Critical Approaches to Food and Health Tues. (Sept. 3rd) ​Critical Approaches I—What Is Nourishment? Readings: 1. Biltekoff, Charlotte. ​Eating Right in America: The Cultural Politics of Food & Health (Chapter 1: The Cultural Politics of Dietary Health) 2. Scrinis, Gyorgy. ​Nutritionism: The Science and Politics of Dietary Advice (Chapter 1: A Clash of Nutritional Ideologies) Thurs. (Sept. 5th) ​Critical Approaches II—Eating and Cooking in France and Japan Readings: 1. Ferguson, Priscilla Parkhurst. ​Accounting for Taste: The Triumph of French Cuisine (Chapter 2: Inventing French Cuisine) Week 3: ​Critical Approaches to Food and Health (Continued) Tues. (Sept. 10th) ​Critical Approaches III—Feeding and Perceiving the Body Readings: 1. De Certeau, Michel. ​The Practices of Everyday Life, Volume 2: Living and Cooking (Chapter 11: Plat du Jour) 2. Kuriyama, Shigehisa. ​The Expressiveness of the Body and the Divergence of Greek and Chinese Medicine​ (Chapter 1: Grasping the Language of Life) Thurs. (Sept. 12th) ​**Film Screening: ​Ants on a Shrimp​, Directed by Maurice Dekkers (2016) Week 4: ​Writing, Reading, and Consuming Food Cultures in Edo Japan (1603-1868) Tues. (Sept. 17th) ​Urban Eating—Culinary Culture and the Birth of the Restaurant in Japan Readings: 1. *“Excerpts on Food & Restaurants from the Edo Period” (Unpublished Translation) 2. Nishiyama Matsunosuke. ​Edo Culture: Daily Life and Diversion in Urban Japan (“Emergence of the Restaurant”) Thurs. (Sept. 19th) ​Poetics and Play in Edo-Era “Cookbooks” 1. Rath, Eric. ​Food and Fantasy in Early Modern Japan (Chapter 5: Food and Fantasy in Culinary Books) **In-Class Activity: Edo Food Board Games 5Week 5: ​Eating Right, Living Right in the Edo Period Tues. (Sept. 24th) ​Nourishing Life—Diet and Lifestyle in the Edo Era Readings: 1. *Kaibara Ekiken. ​Yojokun: Life Lessons from a Samurai ​[1713] (Chapter 2: Food, Drink, and Sexual Desire) 2. Hanley, Susan B. ​Everyday Things in Premodern Japan (Chapter 4: A Healthful Lifestyle, 77-94) Thurs. (Sept. 26th) ​The Great Edo Famines—Nourishing the Impoverished Readings: 1. *Takano Choei, “Treatise on Two Things for the Relief of Famine [1836].” In Practical Pursuits: Takano Choei, Takahashi Keisaku, and Western Medicine Week 6:​ Articulating the Boundaries of Japanese Food—Globalizing Food and Etiquette in Edo & Meiji Tues. (Oct. 1st) ​Eating Like the Other in the Edo Era Readings: 1. *“The Southern Barbarian’s Cookbook [17th Century].” In ​Food and Fantasy in Early Modern Japan 2. Schlachet, Joshua. “A Chinese Table in Tokugawa Japan: Material Conventions and Cultural Representations in Nagasaki’s Shippoku Ryori” Thurs. (Oct. 3rd) ​New Meals, New Manners in Western-Style Dining Readings: 1. Redfern, Mary. “Getting to Grips with Knives, Forks, and Spoons: Guides to Western-Style Dining for Japanese Audiences.” ​Food and Foodways ​no. 22 Week 7:​ Nourishing the National Body—Meat and National(ist) Nutrition in the Meiji Era (1868-1912) Tues. (Oct. 8th) How Modern Was Meat Eating? Readings: 1. *Kanagaki Robun. “The Beefeater (Aguranabe)” [1871] 2. Steele, William. ​Alternative Narratives in Modern Japanese History (Chapter 7: The Emperor’s New Food) Thurs. (Oct. 10th) ​“Inventing” Vitamins and Competing Nations in the Early 20th Century Readings: 1. *​Shokupan bōkoku ron (On Bread and National Ruin) [1913] 2. Bay, Alexander R. ​Beriberi in Modern Japan: The Making of a National Disease (Chapter 6: The Science of Vitamins and the Construction of Ignorance) [Show More]

Preview 1 out of 8 pages 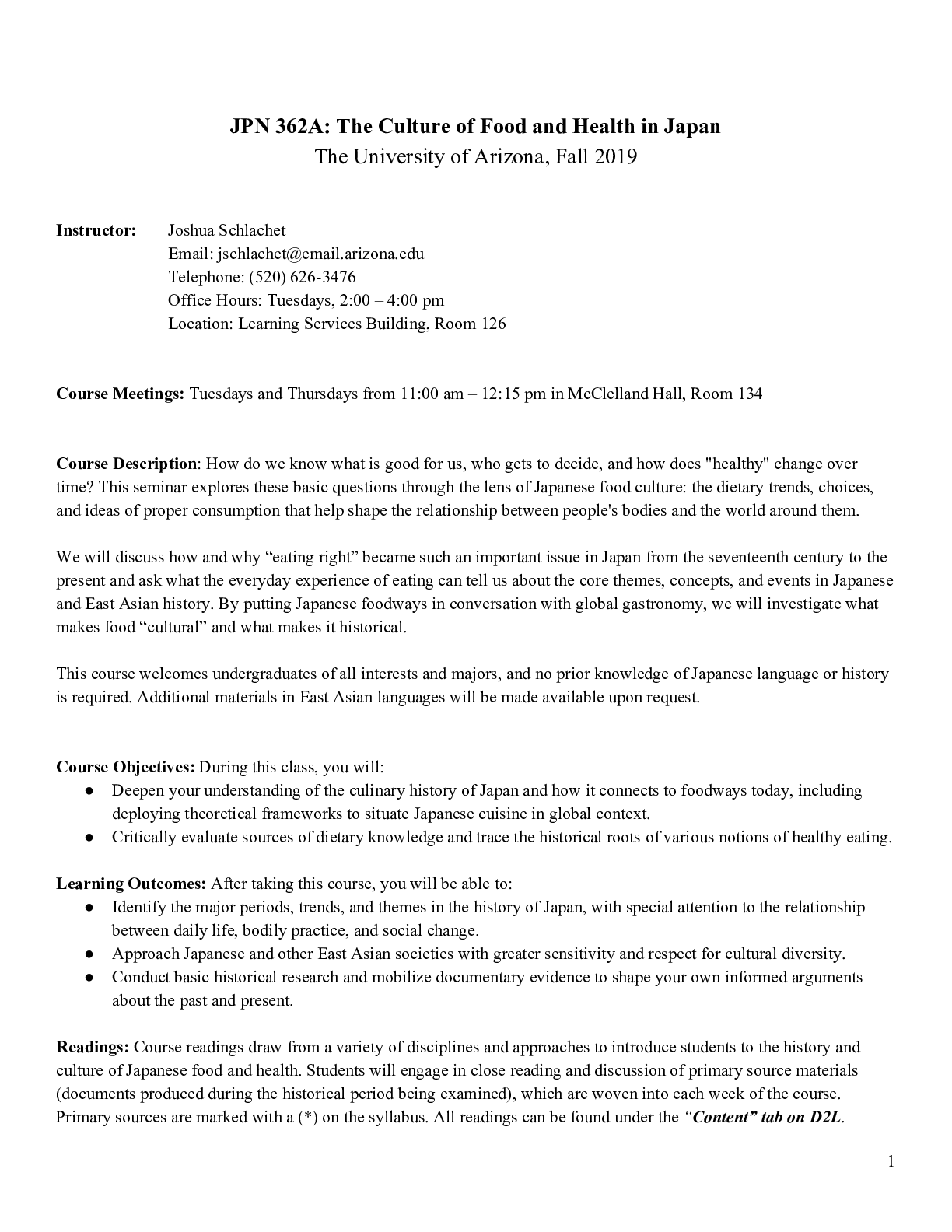 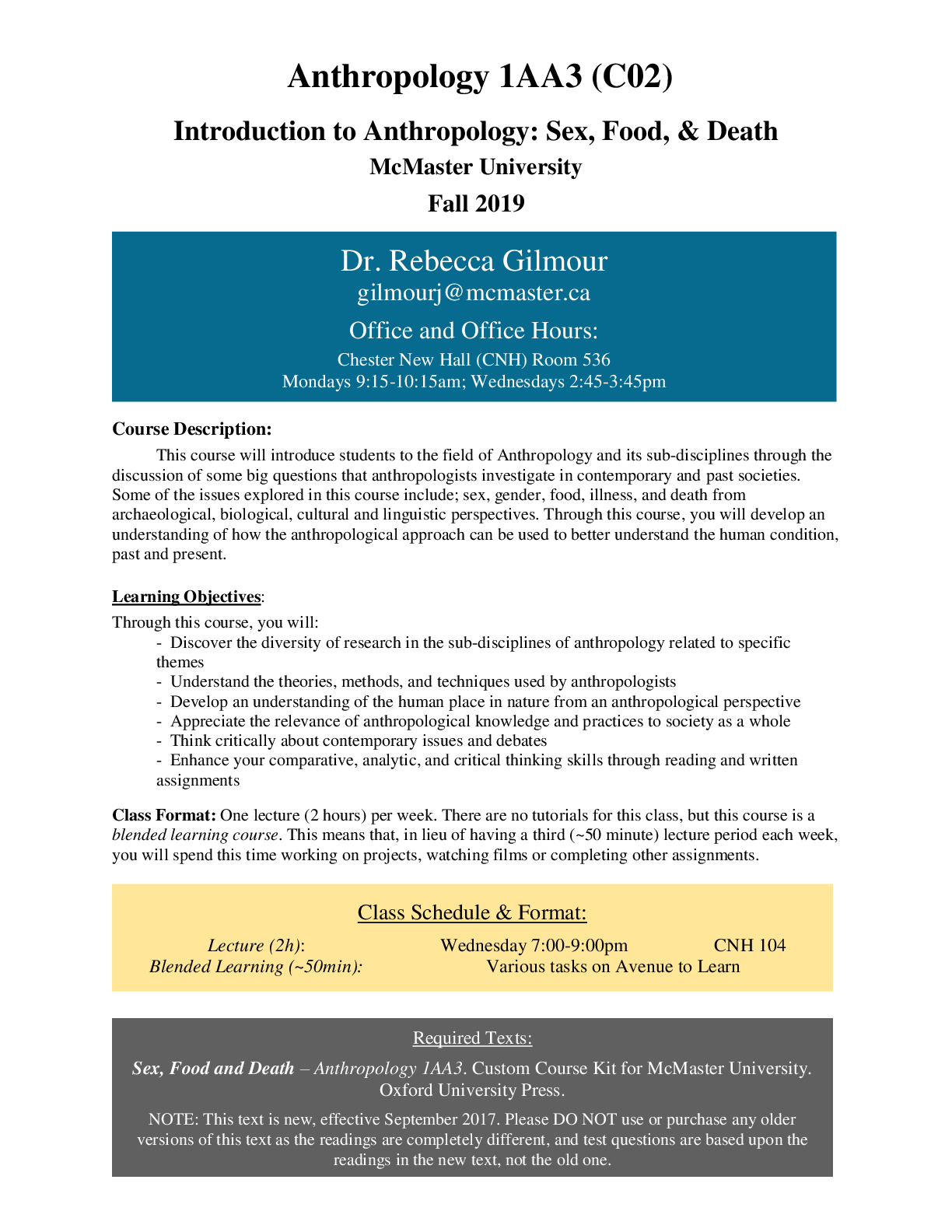 Course Description: This course will introduce students to the field of Anthropology and its sub-disciplines through the discussion of some big questions that anthropologists investigate in contempo... 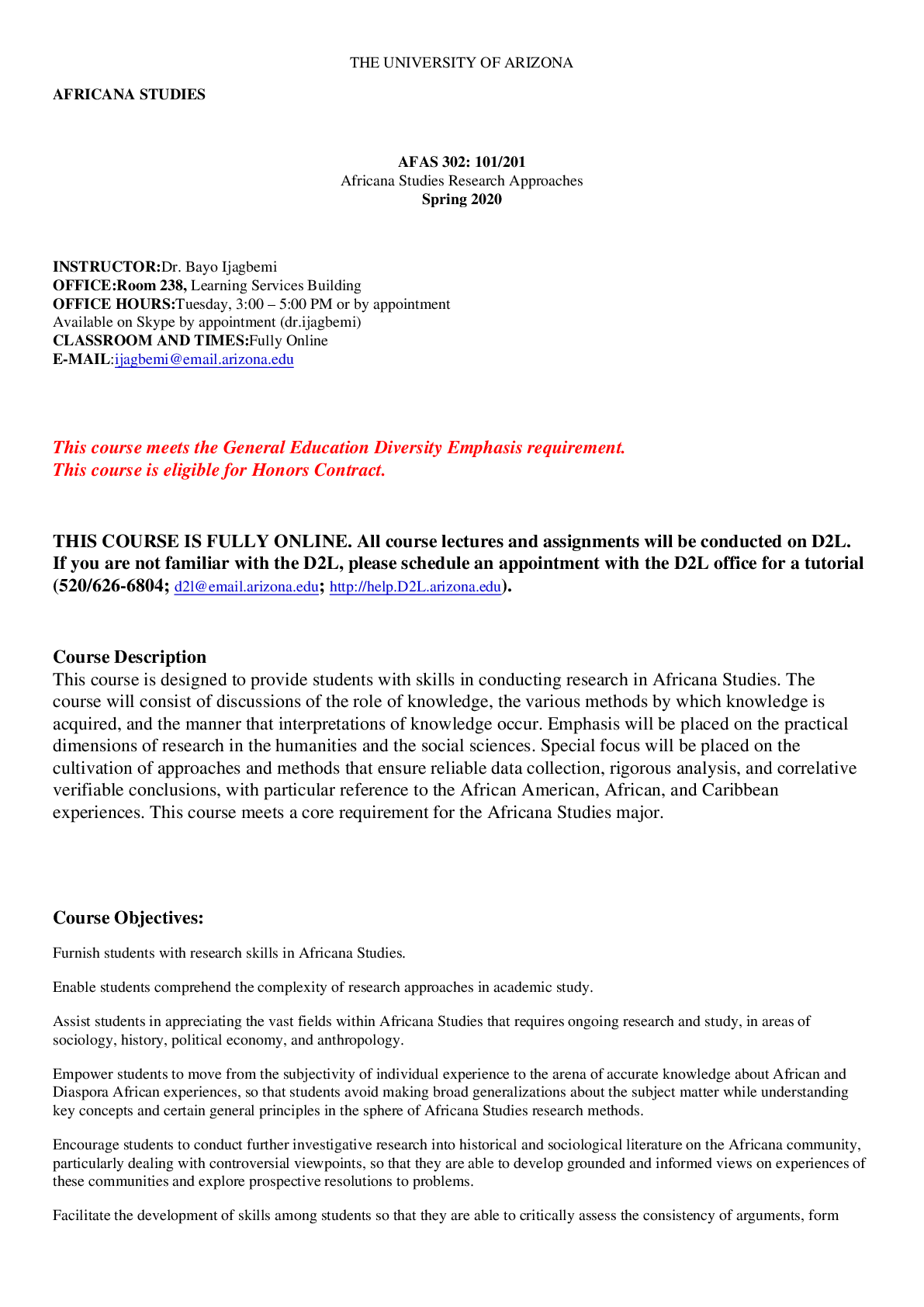 Course Description This course is designed to provide students with skills in conducting research in Africana Studies. The course will consist of discussions of the role of knowledge, the various me... 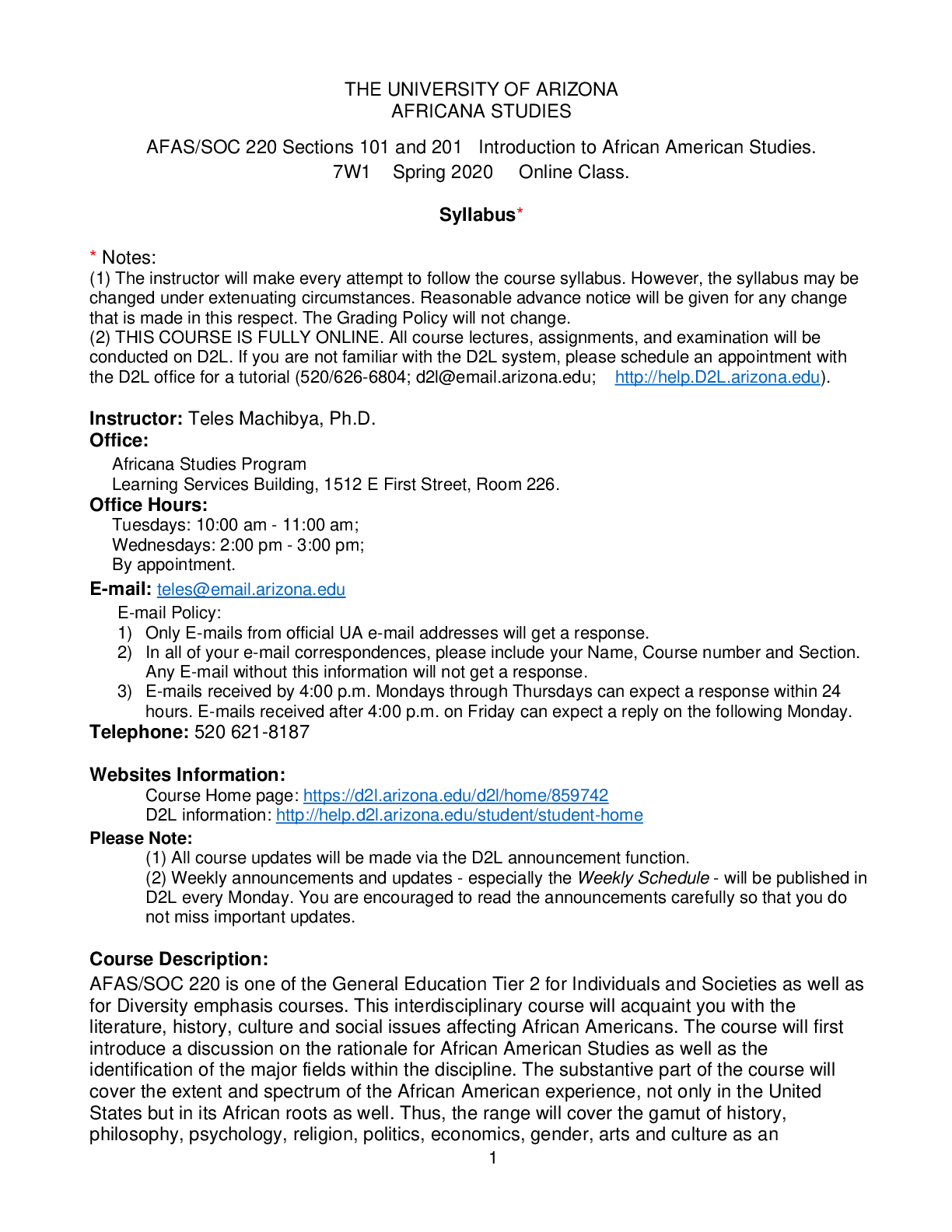 Course Description: AFAS/SOC 220 is one of the General Education Tier 2 for Individuals and Societies as well as for Diversity emphasis courses. This interdisciplinary course will acquaint you with... 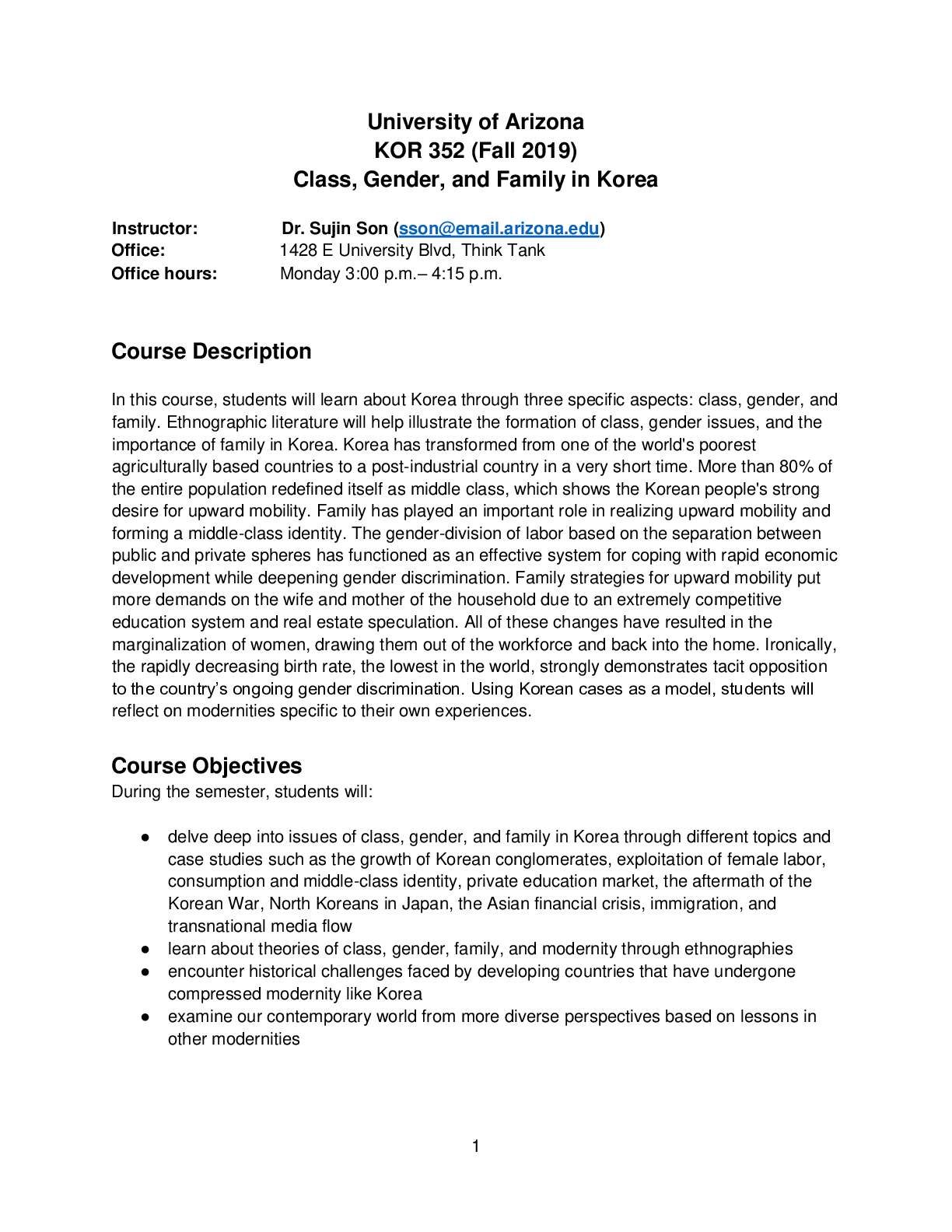 Course Description In this course, students will learn about Korea through three specific aspects: class, gender, and family. Ethnographic literature will help illustrate the formation of class, gen...