Sophia University CS-121 / CSCI-E121 sophia milestone 2. 1 Katelynn and Genevieve want to make flyers to advertise their school's play. They will collaborate on the flyer document online, and remote... ly. Which productivity software should they use? • Microsoft Access • Google Docs • Microsoft PowerPoint • Google Sheets 2 Select the scenario that describes a top-down approach to data warehouse design. • O'Reilly's Public House, which has locations in seven states, merges the data marts from each location into a single data warehouse. • Mike's Decorating creates data marts from several departments, then combines them into a central data warehouse. • Gilbert's Groceries adds all of the data from its vendor, sales, and human resources departments to the central data warehouse, and then divides it between several data marts. • Tyson’s Business Innovations creates data marts for its HR and Payroll departments to resolve an employee compensation dispute. 3 Brad launches a program in order to see all of his files, folders, and programs in one place. Which element of the Microsoft Windows operating system is Brad using? • File Explorer (formerly Windows Explorer) • Windows Shell • Security and Maintenance • Taskbar 4 __________, developed by OpenOffice, is an example of word processing software. • Impress • Keynote • Writer • Numbers 5 Which of the following is a challenge of data warehousing? • A high reliance on data quantity • Data originality • Privacy concerns • Cloud computing environments 6 Brenda has a laptop that is more than six years old. Since she upgraded the Windows operating system to the latest version, her machine crashes when she starts it up. To solve the issue, Brenda should try __________. • System Configuration • Disc Cleanup • Defragment • System Restore 7 Identify the statement about Windows tasks that is FALSE. • A common way to shut down the computer’s operating system is by using the Start menu. • The boot process is the process for powering off a computer. • To launch an application, click the Windows icon, select "All Programs," and then click an application. • Users log into their accounts on the Welcome screen, before Windows is ready to use. 8 Which statement describes an example of database software? • Microsoft Word enables users to write and edit text documents. • Microsoft Excel enables users to perform calculations and statistical analyses. • Microsoft Access enables users to create, store, and retrieve records. • Microsoft PowerPoint enables users to create animated presentations that can be projected on a screen. 9 Carrie's computer does not recognize her zip drive when she plugs it into a USB port. Carrie's computer is experiencing a(n) __________. • system performance problem • file compatibility issue • application crash • external error 10 When Beth touches the screen of her smartphone to launch an application, the operating system's __________ enables her to access her software and files. • welcome screen • hardware • user interface • memory RATIONALE When Beth touches the screen of her smartphone to launch an application, the operating system's user interface enables her to access her software and files. User interfaces are how the user and a computer system interact. CONCEPT Operating Systems 11 Which of the following is the FIELD in a database table? • [email protected] • Name • Emily Walker • 6/5/1985 12 An enrollment counselor queries the following database table to identify undergraduate accounting majors. How many records are displayed in the query? Student_ID Student_Name State Birth_Year Degree Major 44352 Anderson, Tiffany IL 1994 Graduate Economics 98425 Avendano, Marco MN 1994 Graduate Accounting 67512 Barrett, Eliza IL 1992 Graduate Mathematics 97156 Brown, Amy MN 1994 Undergraduate Pre-Medicine 36401 Elissa, Jose WI 1997 Undergraduate Accounting 97315 Grey, Nicole VT 1999 Undergraduate Theatre 54074 Harris, Blake IL 1992 Undergraduate Accounting 64782 Jensen, Allan MN 1990 Graduate Economics • 1 • 2 • 3 • 4 13 Select the data type that can only be classified as a number. • 11/10/11 • 83.152 • $1,253.12 • 13:30 14 Which of the following correctly describes a record? • A record consists of one field. • A record is a flat file. • A record is a set of data organized in columns and rows. • A record appears as a row in a table. 15 Cristina is adding sound files to her presentation. Select the set of file types that Christina can use to add this media to her presentation. • .mp3 and .wav • .wma and .sql • .csv and .jpeg • .gif and .wmv [Show More]

Preview 1 out of 8 pages 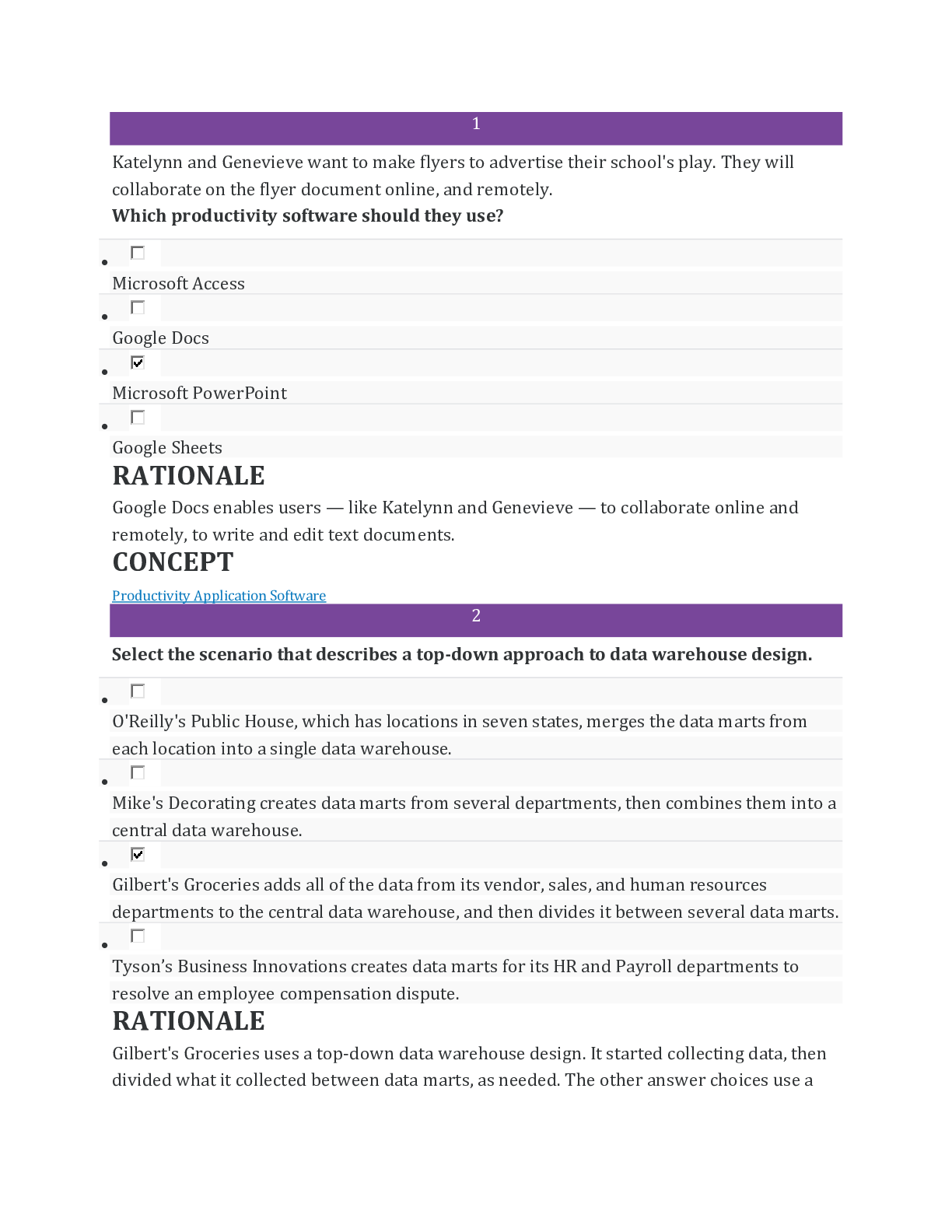 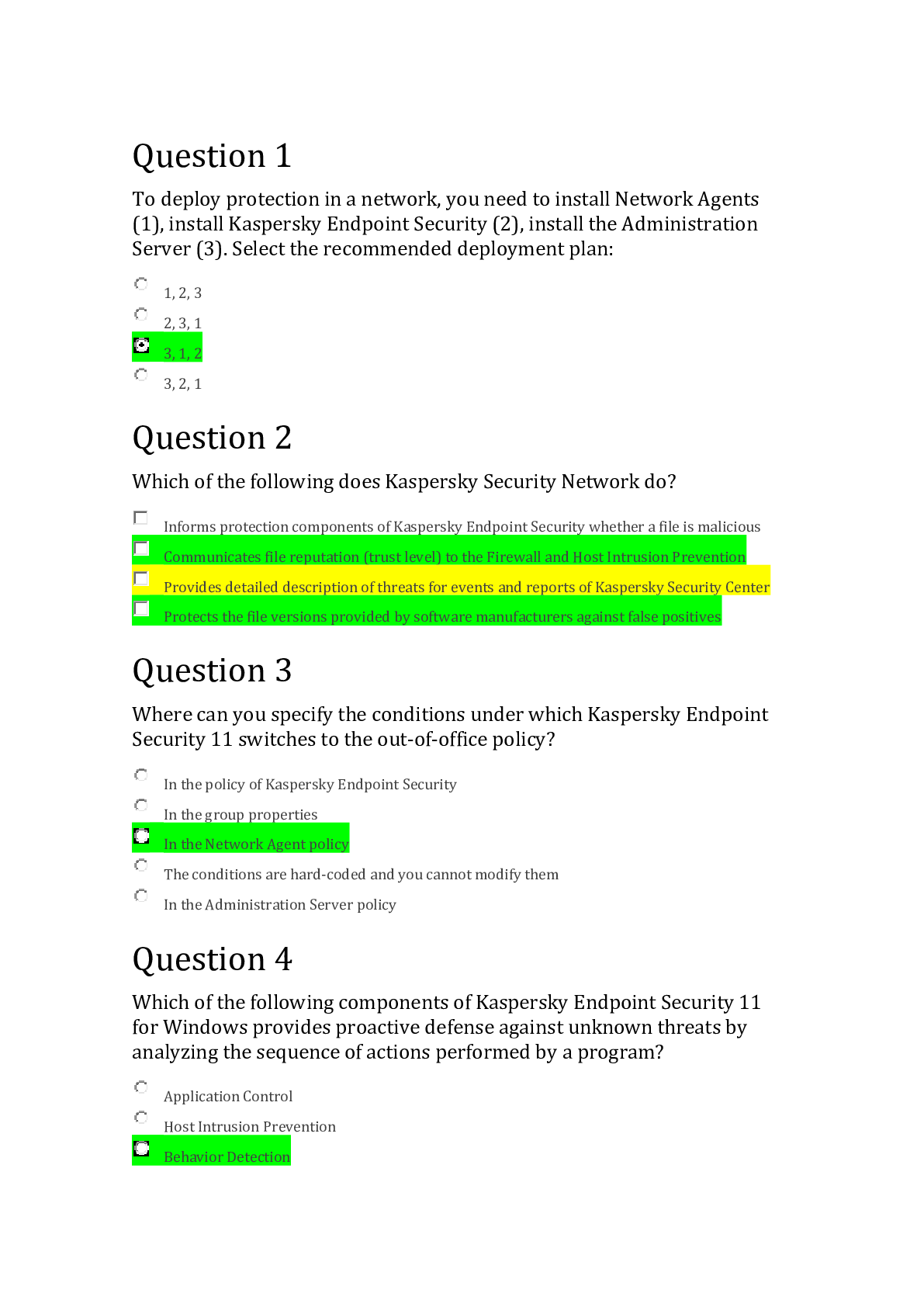 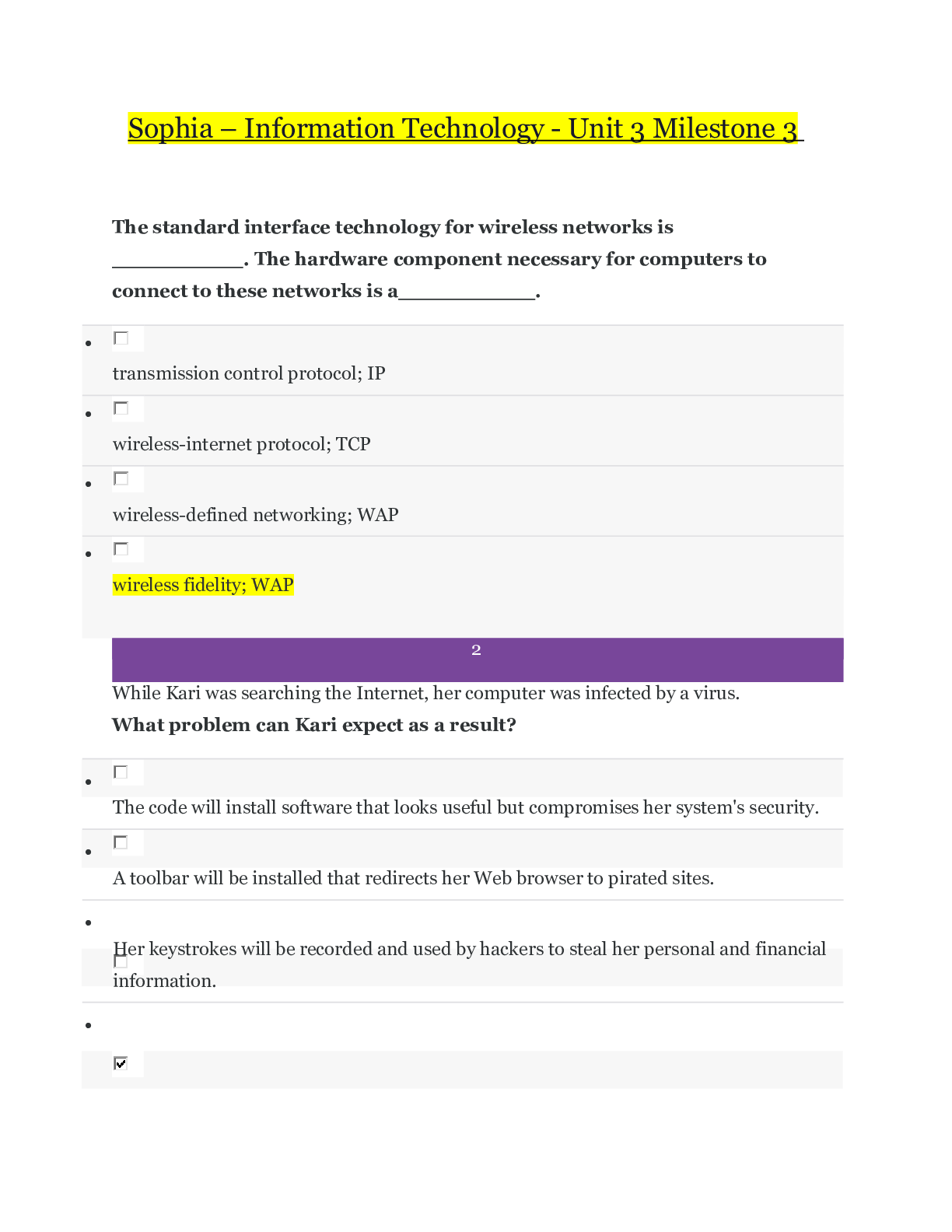 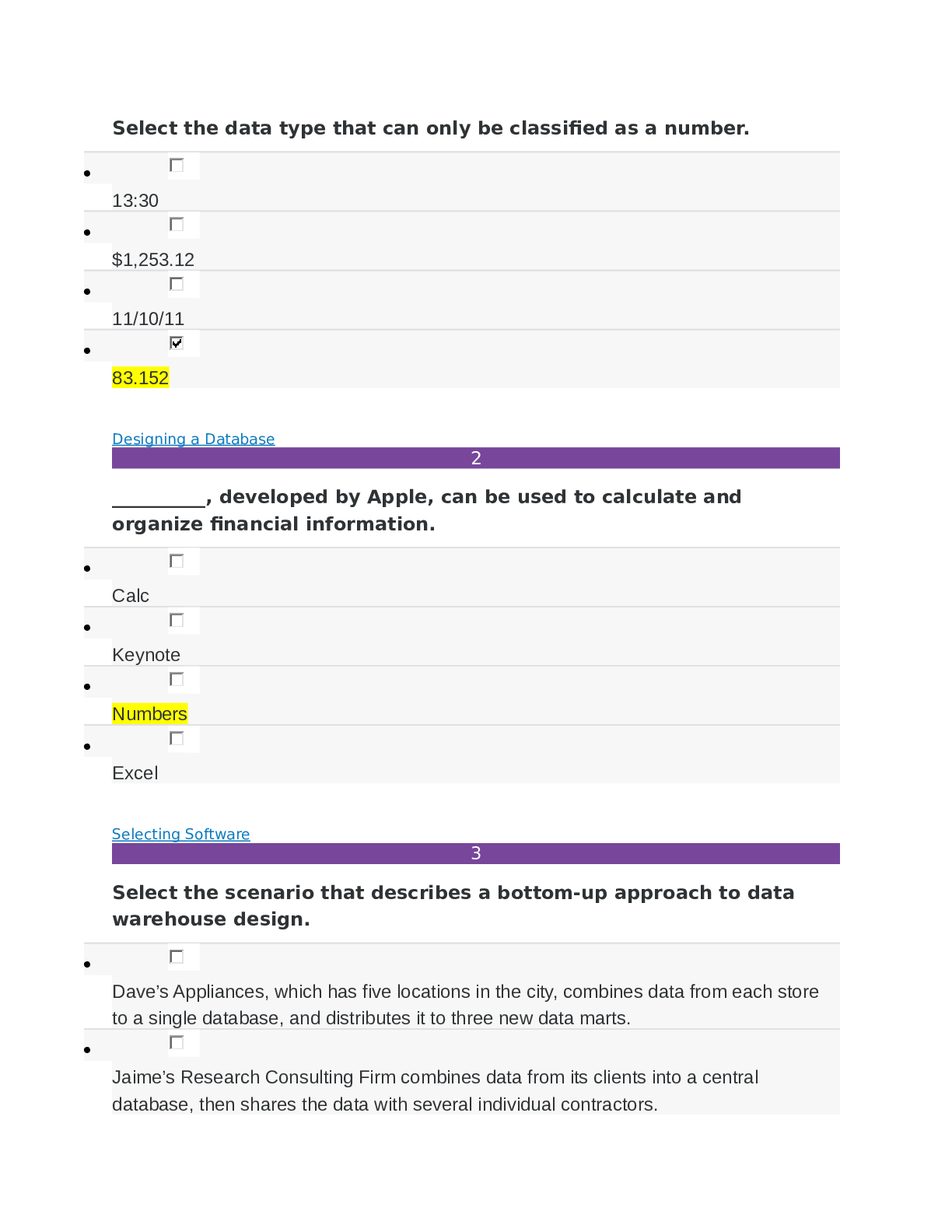 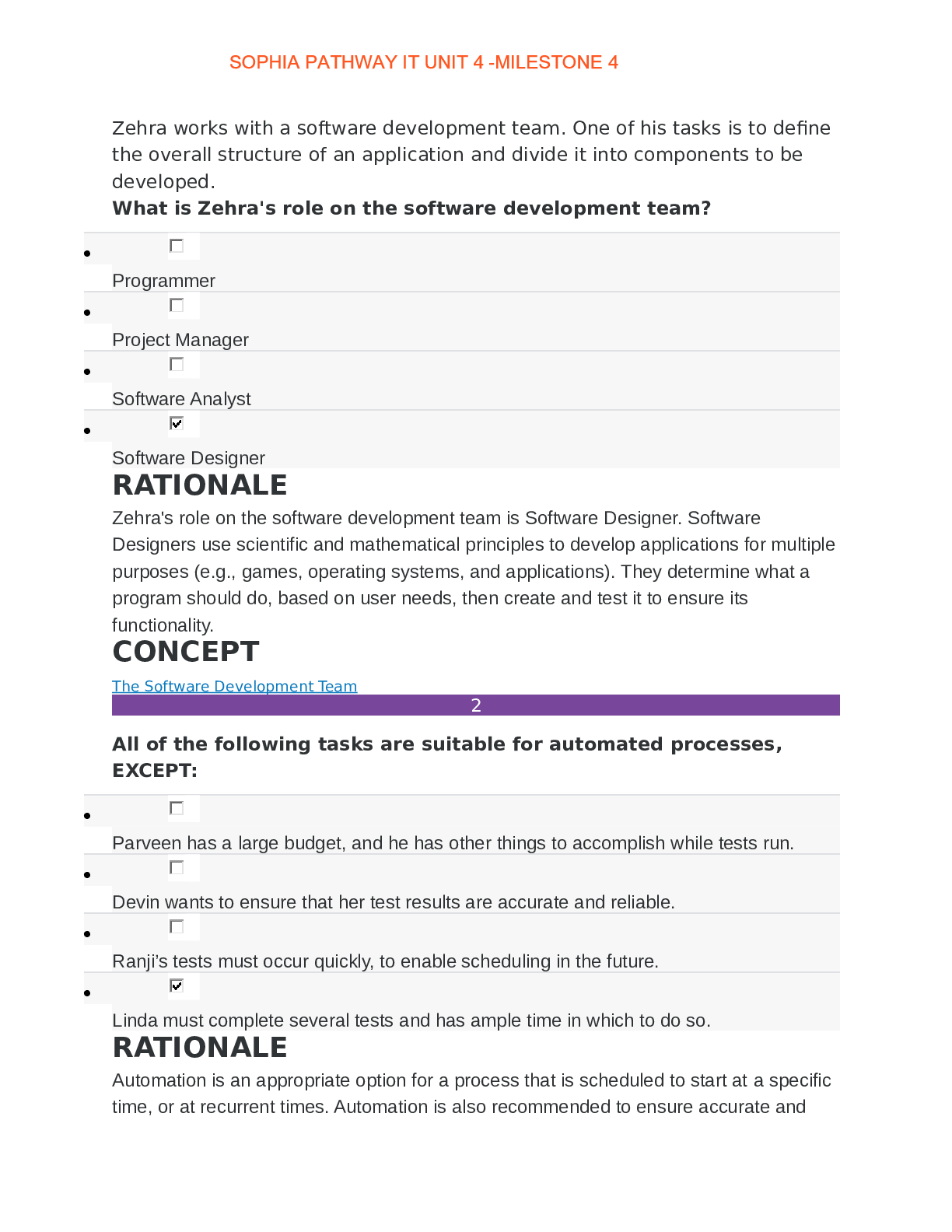 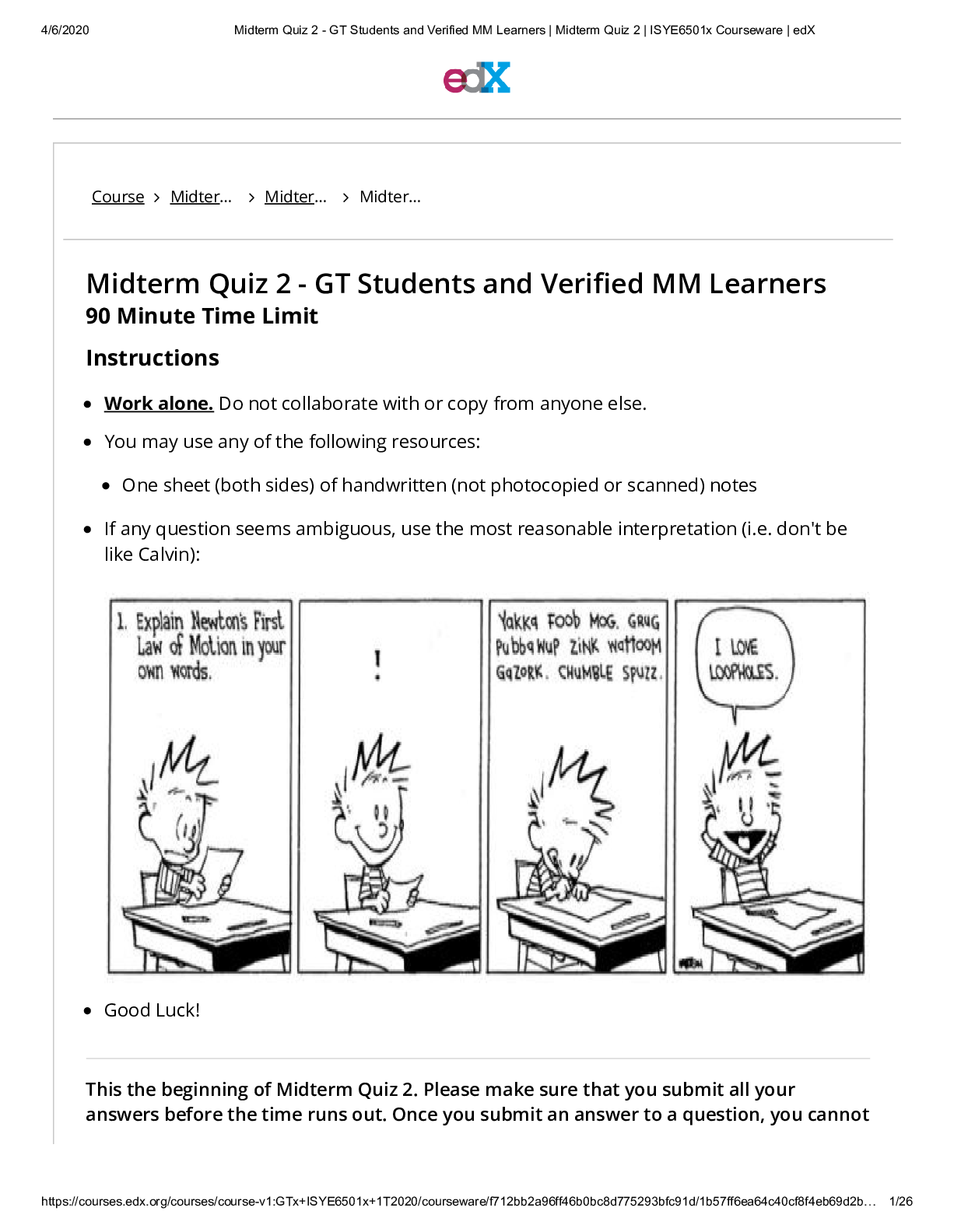 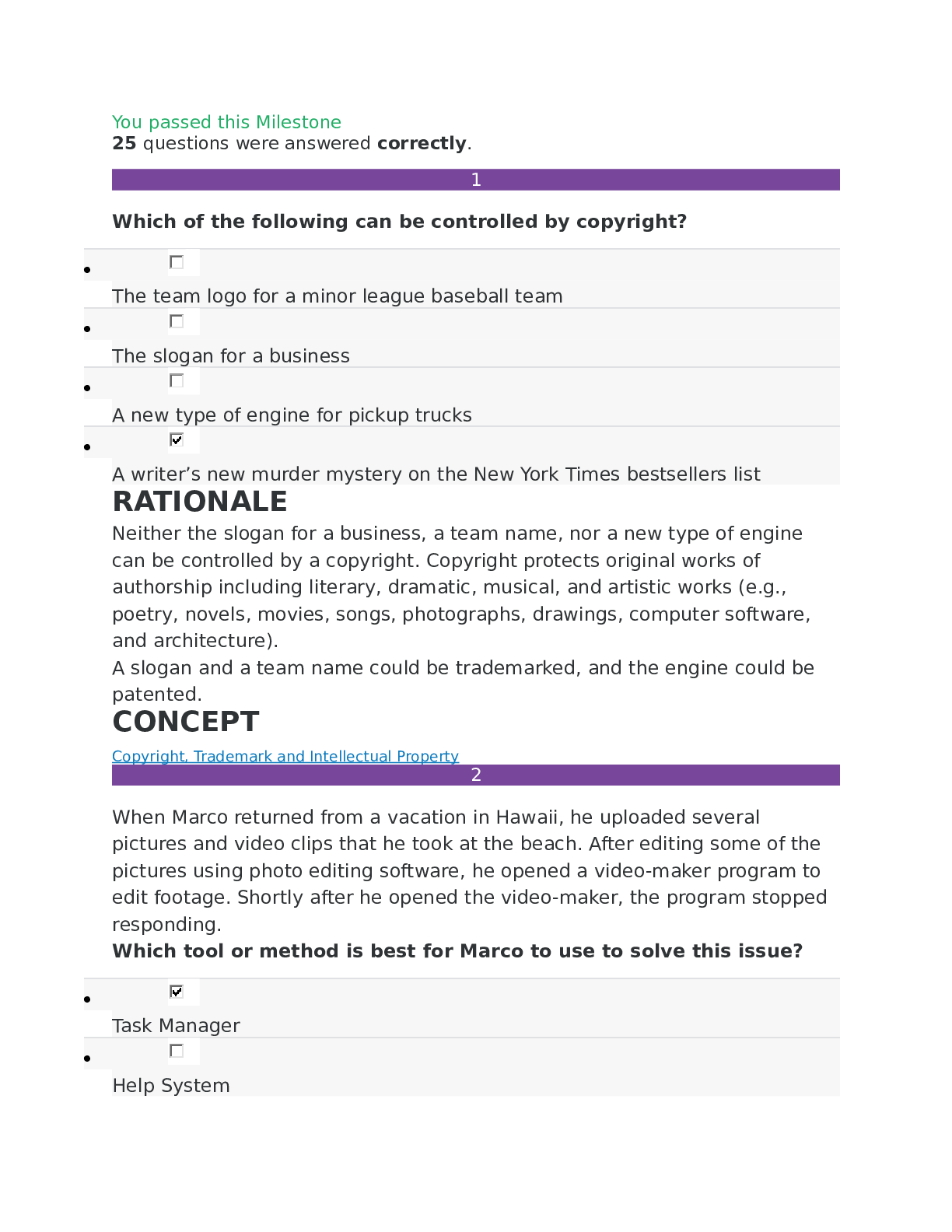 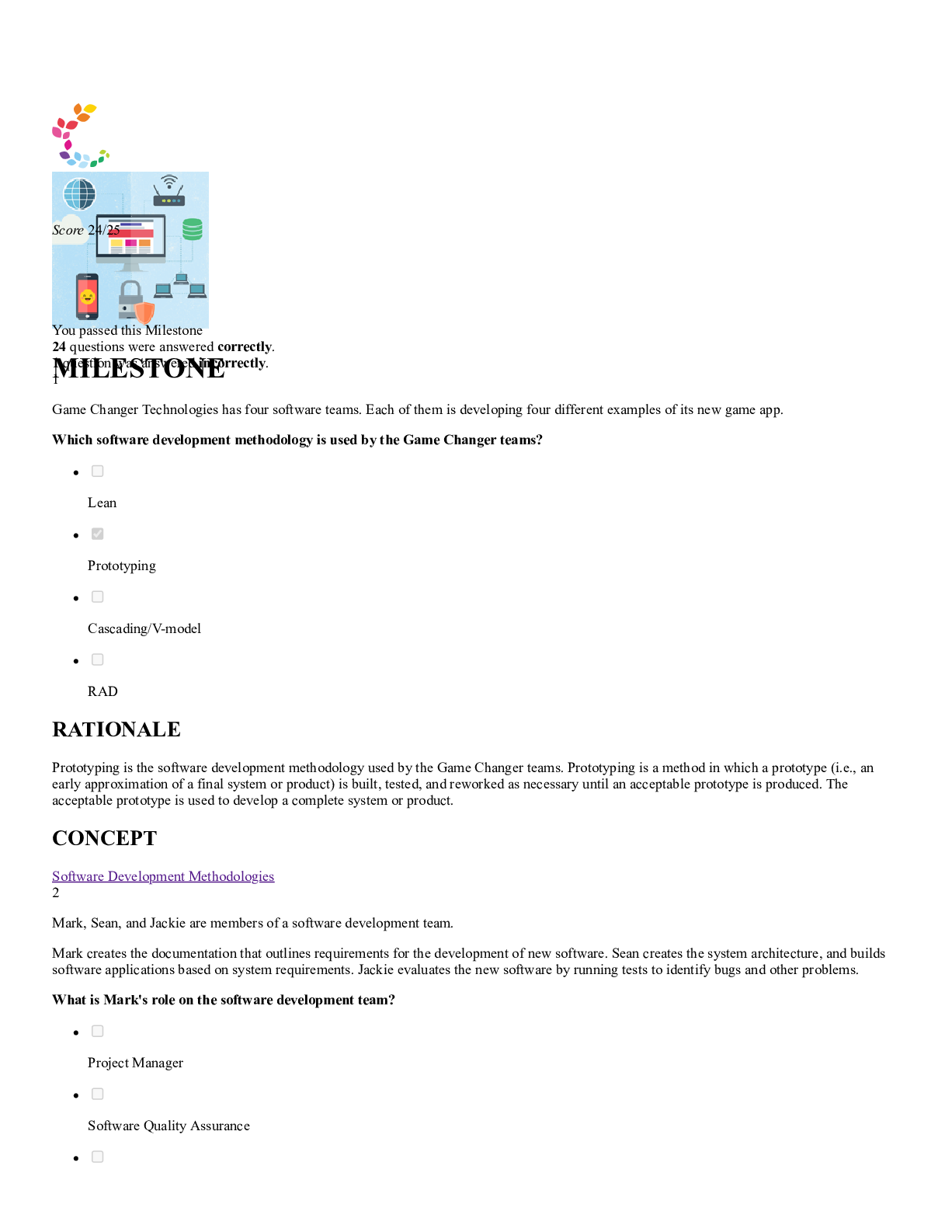 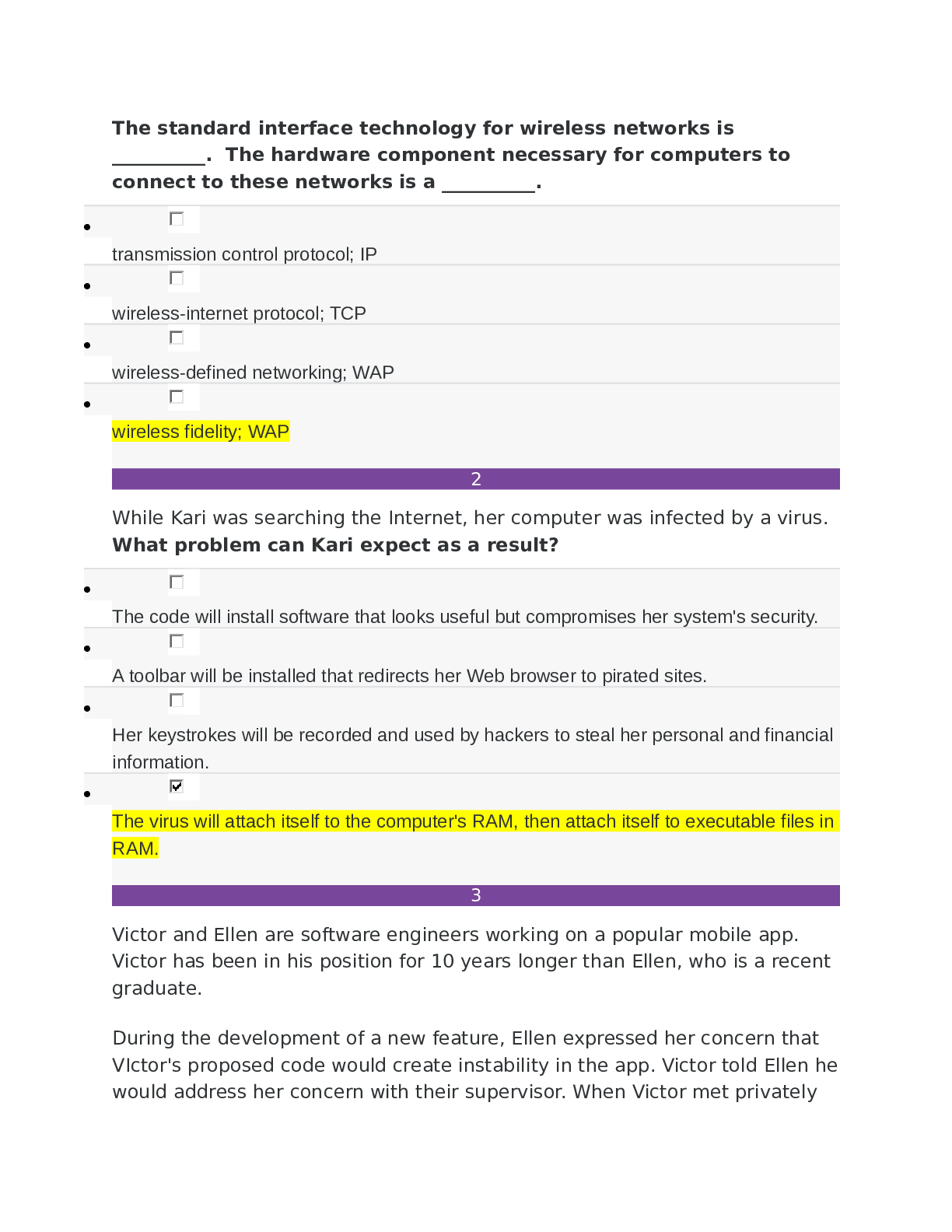 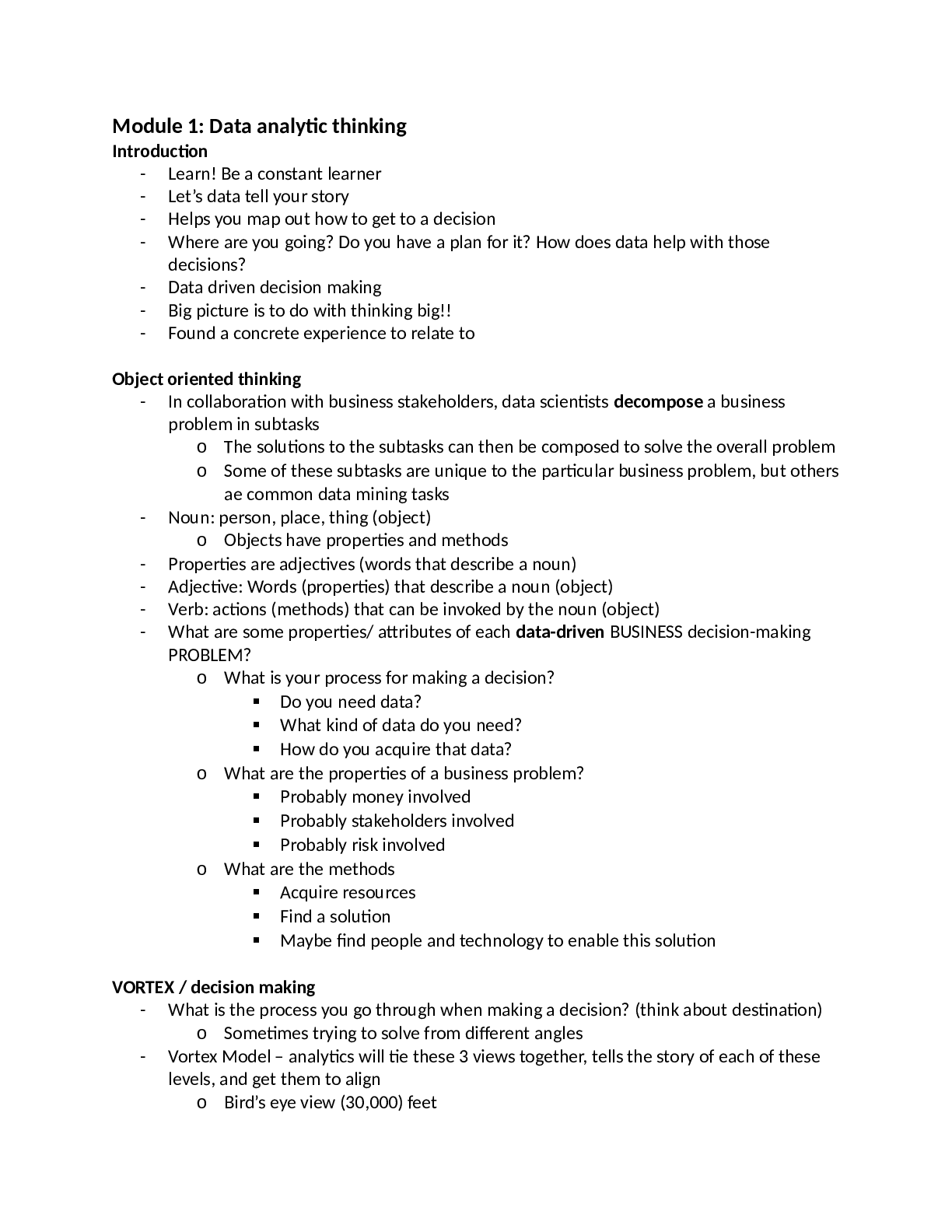